While the last few editions of This or That have featured very, very similar-colored products, it’s also good to compare products that aren’t quite as close in color. This helps to figure out why we may be drawn to one color over another while also assessing any formula differences.  Let’s take a look at two sparkly reds!

Learn how to make more critical comparisons between two products when you’re choosing between two options, whether you’re in decluttering mode or considering a new purchase or have been tempted by something new and shiny! 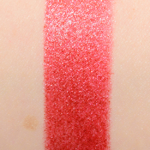 Reasons for Pat McGrath Rebel Red: For those who prefer a cooler, more blue-based red, this would be a better selection as On Fire is definitely fiery red! The dimension on Rebel Red is more complex, too, and the sparkles seemed slightly finer/smaller, so they feel less noticeable when I pressed my lips together, which may be preferred for those more sensitive to sparkle texture. It was longer-wearing and more apt to leave a noticeable reddish stain behind as it wore down, so if better wear is necessary, this would also be in favor of this shade.

Reasons for UOMA Beauty On Fire: For those who prefer a warmer, more orange-based red and like sparkle but don’t want it to be quite as iridescent as the sparkle was more tonal. The color was also darker and less bright, which may make it more “wearable” for some. This is the more budget-friendly choice, and the packaging features a magnetic closure, which I find to be nicer and more functional than Rebel Red.

Editor’s Pick: I prefer the color, finish, and slightly more even application of Rebel Red as I tend to wear blue-based reds over orange-based reds myself.

Bottom Line: They’re both comfortable, long-wearing sparkly lipstick formulas, and I think it really comes down to one’s preference for color rather than finish per se. If the colors were exactly the same, there’s a good chance I’d go for UOMA’s formula just because it is significantly cheaper, and I prefer the packaging (which is often part of what drives a luxury price point).

The 20 Best White Jeans That'll Replace All Your Black Pairs